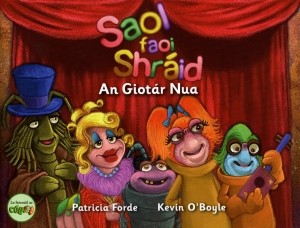 I previously wrote a blog post about “Saol Faoi Shráid” an animated children’s TV series created by Meangadh Fibín for TG4. The series is aimed at 3-6 year olds and follows the adventures of brother and sister duo, Glibín & Ribín, aliens from the centre of the earth.

A book based on the same series, “Saol Faoi Shráid – An Giotar Nua”, was launched at the Baboró International Arts Festival for Children in Galway last October. The book can be bought in a small and larger format and the large version of the book is suitable for primary teachers teaching junior/senior infants and 1st class.

The book is a fun and heartwarming story about friendship by the creators of “Saol faoi Shráid”, Patricia Forde, Kevin O’Boyle and Meangadh Fíbín. Gliblín loves to play the guitar but he has one big problem… he doesn’t have a guitar. His sister Ribín decides to fashion a guitar for her brother from bits and pieces she finds lying around, but it’s a secret. Her friends Dris and Rocco help her. Glibín can’t figure out why nobody has time to play with him but he has a big surprise in store.

Meangadh Fibín, the TV production company that has created “Saol Faoi Shráid” has given us three books to give away as prizes for a competition. To be in with a chance to win one of the books, simply fill in the form below with your details and the answers to the simple questions. All entries for the competition must be in by 5pm this Thursday February 18th. Only one entry per teacher is permitted. The winner will be randomly selected on Twitter (@seomraranga) after this time.

Please make sure that you give a contact email address that you can be contacted on immediately after the competition as teachers have previously forfeited prizes by not answering their emails promptly! Again, many thanks to Meangadh Fibín for sponsoring the prizes for this competition. The book can be purchased online HERE (small format) or HERE (large format).