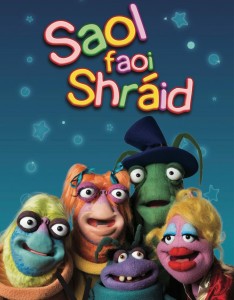 “Saol Faoi Shráid” is an animated children’s TV series created by TV production company Meangadh Fíbín for TG4. It is broadcast every weekday on TG4’s young people’s slot Cúla 4 and some of the series is also available to view at any time on the TG4 Player at www.tg4.tv The series is aimed at 3-6 year olds and follows the adventures of brother and sister duo, Ribín & Glibín, aliens from the centre of the earth.

When their tunnelling machine crashes, they find themselves in a new underground world where they find a new home with a group of insect characters who have formed a rock band; Cicí, Rocco & Dris. Ribín and Glibín find out all that they can about this new world that they now inhabit and they learn a lot from their friends above the street, young Irish children from around the country who help them to problem solve in each episode. The series features newly composed songs and lots of old Irish tales and stories intermingled throughout the story lines.

There is an interactive Website based on the same series at www.saolfaoishraid.ie where children can play games or sing along to songs from the show.  The site also features free downloadables based on the series and on the featured characters. A book based on the same series can be bought in a small and larger format and the large version of the book is suitable for primary teachers teaching junior/senior infants and 1st class.

A Saol Faoi Shráid App is available free of charge on the App Store and on the Google PlayStore:

This looks like a good package of multimedia and interactive resources for primary schools and would be perfect entertainment for those rainy days in schools.