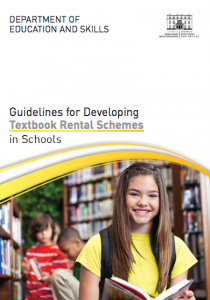 The Irish National Teachers’ Organisation (INTO) has said that the new Book Rental Scheme, as proposed by Minister for Education and Skills Ruairí Quinn, is penalising schools that have struggled and made sacrifices to set up book rental schemes in the past. The General Secretary of the INTO, Sheila Nunan, said that the Minister’s proposal is completely unacceptable and called it “nothing more than a slap in the face to schools”.

Minister Quinn announced today that he had secured €15 million to support the establishment of book rental schemes in primary schools which do not currently operate them. This money is to be used as seed capital to allow primary schools to set up such book loan schemes. It is estimated that only 20% of schools have not set up such Book Rental Schemes. The Minister said:

“I am delighted to see that so many of our primary schools have taken the initiative to establish book rental schemes. They are already helping parents to drive down the cost of books. The funds that I have secured will now be directed towards those schools who have not yet set up such schemes so that all parents, no matter where their children go to school, have an opportunity to reduce the costs of going to school.”

Seomra Ranga reported this time last year that the Minister had issued Guidelines For Book Rental Schemes. Schools are now being invited by letter to apply for a grant to establish book rental schemes, subject to certain criteria (see below). The deadline for applications is the 31st of January. It is expected that qualifying DEIS (Delivering Equality of Opportunity in Schools) schools will receive €150 per child over three years, while non-DEIS schools will receive €100 per child.

The INTO is unhappy with the operation of the scheme. It says that

“The minister’s commendation of their efforts without any money will sap any remaining goodwill. Why should schools make the effort to make up for inadequate state funding if their only reward is to be commended and excluded?”

However, the Minister has rejected criticism of the decision to only fund those schools without any book rental scheme saying that all schools are still entitled to the annual book grant of €11 per pupil.

Criteria For Participating in the Book Rental Scheme

(a) The school authorities must undertake to establish a textbook loan/rental scheme (covering either hard copy or electronic books) for the main textbooks used by the students in accordance with best practice contained in the Guidelines for Developing Textbook Rental Schemes in Schools for a minimum of 5 years. A book loan/rental scheme will normally have to achieve a life of approximately five years for each textbook, for it to break even.

(b) The school must confirm that it did not operate a school textbook loan/rental scheme in the school year 2013/14.