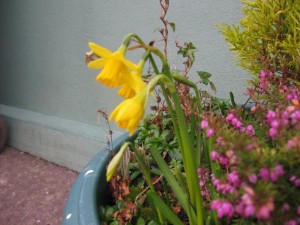 The idea is simple. Just Tweet with your pupils any time during the week of March 4th – 8th about any signs of Spring that you see in your classroom, school area or locality. Even better, Tweet a photo of the sign of Spring that you and your pupils noticed. To keep all of the Tweets together use the following Twitter hashtag: #antearrach Possible things you could Tweet about might be:

There are lots of classes on Twitter now and some may have recently joined so this might be the perfect opportunity for you to Tweet with your class. Let other schools/classes that you are in contact with through Twitter know about the project and invite them to join in. If you are in contact with a school abroad, get them to join in too to give the project an international dimension. To make the project collaborative, don’t forget to reply to/comment on the Tweet of another school. So let’s build up a picture through Twitter of what the Signs of Spring in Ireland 2013 are during the week. You may wish to use a Twitter Client like Tweetdeck (which I use in class) or Twitterfall which will allow you to set up a specific column to view all of the #antearrach Tweets as they come in during the week.

A condition of joining in the project is that you agree to have your Tweets collated into a project transcript to be available as a download to all teachers through Seomra Ranga. Also, if you Tweet a photograph, you agree to it being included in a photo album on Seomra Ranga’s Flickr Page which will keep a record of the Signs of Spring 2013. If you are comfortable with those simple conditions, then let the Tweets flow from March 4th – 8th. Again, don’t forget to include #antearrach in every Tweet so that it can be collated into the transcript.