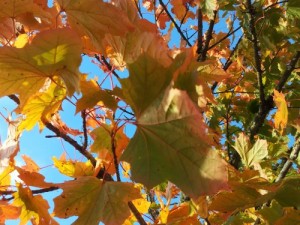 The first week of October saw us take part in our first “Signs of Autumn” Twitter Project. We had done a successful project on the Signs of Spring earlier in the year, so, through Twitter one night, Mary Jo Bell suggested to me that we should organise a similar one to get pupils to record the signs of autumn. This was a hastily organised project, but it turned out to be another great success. Tweets were gathered together by everyone using the project hashtag #anfomhar

There were 52 contributors to the project in the first half of the week and 40 during the second half of the week. Lots of classes from all over the country took part in the project which also took on an international dimension with schools from USA and Canada also taking part. The big difference for me about this Twitter project compared to the last one in Spring was that there was a large increase in photos which were Tweeted during the week. I will try to find some time to gather these together and put them in a photo album on the Seomra Ranga Flickr Page. For me, these photos made the project a lot more real and my own class liked looking at these daily during the week. There was even an Animoto movie Tweeted during the week. I can definitely see us running this project again next year.

For anyone who did not take part in the project or who doesn’t know anything about Twitter, have a look at the transcripts below to get a flavour of what was happening during the week on Twitter. Even the transcripts have been very popular – the first one has been viewed almost 800 times with the second one viewed almost 200 times.