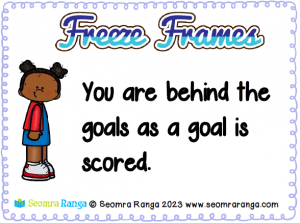 The game should be played in an open space in the classroom, school hall or outside on the yard. The teacher gives a card to each group of pupils for them to organise a “Freeze Frame”, a still image suggested by the theme of the card.

The focus of the game is on physical presence and establishing character and emotions. Language is not necessary for this activity so it should be a non-threatening game. The easiest way to explain this to pupils is to get them to imagine that they are in a video and someone has pressed the “Pause” button. They have to create the scene at that point. Questions for the pupils to bear in mind:

They should try to hold the pose to allow the other pupils to “read” what is going on in the scene.

The full version of this resource, with 50 cards in the pack, is available for Members to download HERE