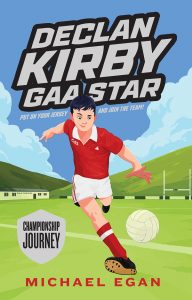 This is a story about the boys in a GAA football team called Smithgreen that don’t usually get to a final but this year its different. There is some good players that are nice and some others that think they are better than they are.

Derek is a good player but has an attitude problem and is a big sulker. His dad Thomas always sides with him against the coach Sam. They plot to replace the Coach with Derek’s dad so that Derek can get his way during matches.

Declan loves football and his team and really wants to win but what he really wishes for is that his dad can come to watch him play.

Tommy knows what to say to get under someones skin and Jimmy knows he is bigger than his classmates. Together the two brothers try to bully the guys on the Smithgreen team in their school because they play for the other team in the big final coming up, St Brendan’s.

Everyones excited and a bit worried on the days before the big final and Declan works hard to save up money to get himself new GAA gear to help play his best.

I honestly loved the book. I loved the characters especially Declan’s friend Harry. The reason why he was my favourite is that he is so committed to his team, even playing the match as soon as he came home from his holiday. I liked that he would never miss a chance to play with his mates. The story was good too. I loved when the St Brendan’s team thought they were going to win but in the second half they lost, that happens to my team too.

I also kinda liked when Thomas tried to become the coach of the team and none of the people wanted to join him, I liked their loyalty to their coach Sam who got them to their final. It was a very good book, I highly recommend you to read this book especially if you like team sports like me. It is one of my favourites and it will yours too. I am in 5th class.

“Declan Kirby GAA Star – Championship Journey” by Michael Egan, is the fourth book in this series. Published by Gill Books, it is now on sale for €8.99 (P/B).

Disclaimer: This book was provided by the publisher, Gill Books, free of charge to Seomra Ranga for the purposes of this review