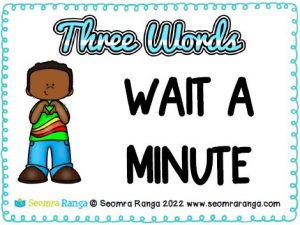 This set of Drama Task Cards could be used with any age group of pupils. The cards are intended to be used as a fun warm-up game for a drama lesson, or they could be the focus of the lesson itself. There are 10 cards in this Free version of the pack, four per A4 page.

The game should be played in an open space in the classroom, school hall or outside on the yard. However, it could also be played just at the top of the classroom as each pupil will be taking their turn individually.

The teaching focus for this game is on facial expression, intonation of voice, use of gesture and body posture.

The individual pupil should begin by standing in a space. The teacher shows the pupil the two words on one of the cards. The pupil should then imagine a scenario where a person would say these three words, in what context, what gesture they might use when saying them and what tone of voice they would say the words in.

Although they are only saying three words, the combination of the other elements should give the game some drama!

This game could also be combined with the Strike a Pose drama game, where the pupil can enter into the space in character and then say the three words.

The teacher could follow up one pupil’s performance by asking another pupil if they could use the same three words but in a different context and in a different tone of voice. You will be amazed at the different interpretations that pupils will come up with.

The full version of this game, with 50 cards in the pack, can be downloaded HERE