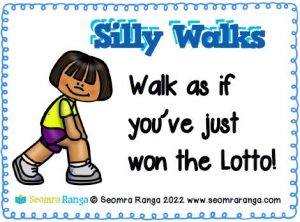 These set of Task Cards could be used with any age group of pupils. The cards are intended to be used as a fun warm-up game for a drama lesson. There are 10 cards in this Free version of the pack, four per A4 page.

The game should be played in an open space in the classroom, school hall or outside on the yard. Pupils should begin by standing in a space not near or touching any other pupil. The teacher calls out the instruction on one of the cards. The pupils should be able to take on a character as hinted by the instruction. 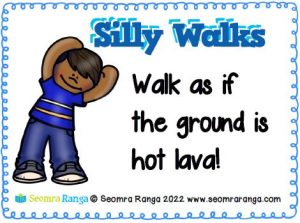 The focus of the game is on movement and the way that the pupils use the space. Language is not necessary for this activity so it should be a non-threatening game.

As pupils move about the space, they should use their body and facial expression as part of their characterisation. They should not touch other pupils or engage with them. Before the game begins, the teacher should identify to the pupils when to stop the activity, eg. on the word “Freeze!” or “Stop!”

The full version of this game, with 50 cards in the pack, can be downloaded HERE