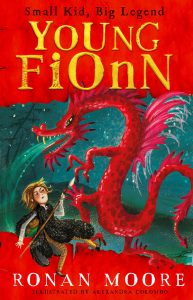 There once was a girl who was named Muirne. She was the daughter of a chief. Her father hated her for some reason and she never knew why. So during the day when her father was busy she would sneak out into the forbidden forest where two very nice old ladies would meet her and take her back to their cottage. They would give her food and treat her like their own daughter.

One faithful day Muirne went to meet the two ladies but they weren’t there. So as she was heading back she heard some noises. She found out what the noises were – it turns out that it was a boy about her age. Muirne and himself started talking, it turns out that he was a warrior and part of a tribe. Muirne said she could be a warrior if her father would let her but he didn’t believe her.

They challenged each other to a duel, who ever wins a series of challenges gets to be the next chief of the warriors. One of the events was swimming and the young boy was not a very strong swimmer, Muirne was because she would catch fish for the two old ladies every day. There was also a strong current. Of course Muirne won.

The next challenge was  archery, Muirne does not have the best aim. After further challenges Muirne won but did not want to become chief. She turned down the position and gave it to the boy who travelled Ireland and Europe with his tribe.

Disclaimer: This book was provided by the publisher, Gill Books, free of charge to Seomra Ranga for the purposes of this review