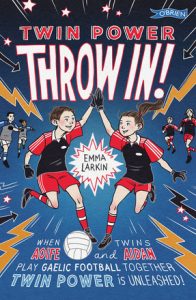 Twins Aoife and Aidan Power live in the village of Droichead Beag where the brilliant Twin Power – Throw In is set. As someone who plays Gaelic Football, I was really interested in the story right from the start.

Aoife was a brilliant footballer but had stopped playing football following an incident in ‘that’ U10 match with ‘him’, a player who played for neighbouring team Gorman. Aidan and their friends, Billy, John and Tina, wanted Aoife to return to play with their Droichead Beag club team.

Their teacher in school, Ms Kelly coached the school football team and played football herself for Carrick. Her plan was to win the new Star Schools competition run by the county, with the winners getting to play in Croke Park. Winning the competition would be one thing; convincing Aoife to play was going to be a much bigger challenge for Ms Kelly.

A school project on the history of the GAA and a meeting with her idol, county player and All Star, Jenny McCarthy brought about a change of heart that saw Aoife return to the playing fields. Revenge against their fiercest rivals Gorman was now their top priority. The story outlines their path to the final, how important the Twin Powers were to Droichead Beag and the rivalry between the two teams which heightens in the build up to the final.

I would give the book 10/10 as it introduces the characters of Aoife and Aidan really well. We get to meet their friends in the story. I was curious throughout the book to know the reason why Aoife wouldn’t play football for her club. I was delighted when she changed her mind.

I’d recommend this book be read by both boys and girls between the ages 8 and 13. The story teaches readers that girls can be as good at football as boys are, the importance of having good friends while also showing how important it is for girls to have a role model to look up to.

‘Fun, friendship and football’ is the theme running through the book. My favourite part about the book was at the end when the final whistle was blown and the players that were once great rivals on and off the field now came to see each other in a different light. I hope that there will be more books from Emma Larkin and that we will find out how Aoife gets on when she starts playing with the new ladies football team that has just been formed in the area.

Thank you for reading my book review.