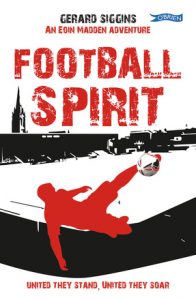 Eoin Madden is in secondary school and has played a lot of rugby. He wants to try soccer and starts a soccer club. His friends and his principal don’t really like Eoin playing soccer. The principal wants him to play a rugby match but he badly sprains his leg and can’t play sport for about four weeks. Eoin misses the matches, but he then meets ghosts that they met before.

Eoin meets new ghosts, and he meets his grandad who played soccer for Manchester United. There are bad guys who try to break Seb Joyce’s shin. Seb plays for Bohs. They get help and there is a good result in the final match which you will have to read yourself to find out. Seb moves to Manchester United for money.

My favourite part was when Eoin struck the final penalty and scored. It was sad when Eoin got hurt and could not play his sports.

I would have liked if the book had more pictures in it. Oh and it would have been better if Seb moved to Liverpool.

I would give this book an 8 out of ten and think it is suitable for say 9 year olds up. It is very good for anyone who likes sports especially soccer fans and Manchester United ones.