Book Review – What Do You Do With A Problem? 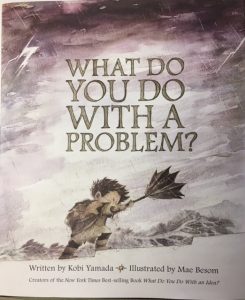 “What Do You Do With A Problem?” is a picture book written by Kobi Yamada and illustrated by Mae Besom. Published in 2016, this picture book could equally be read to and discussed with a variety of different age groups of pupils, with each group getting something out of it.

In the end the boy decides to confront the problem and discovers that every problem holds an opportunity within it for something good – you just have to look for it.

As a teacher or a parent, you can just see the great opportunities for talk and discussion based on the storyline in the book. Many pupils will be able to make a connection between the book and a problem that they have had in their own lives. The book could easily be used as a template for pupils, giving them strategies to use when dealing with their own problems.

Teachers will also readily recognise how this book could be easily used as an accompaniment to an SPHE lesson on feelings. In the current climate where there is an extra focus on pupils and their mental health, this book could act as a motivation for pupils to talk about and discuss problems in their own lives.

Visually, this is a beautiful book. The “problem” is represented by a dark cloud hanging above the boy and following him wherever he goes. As his problem gets bigger, the cloud grows larger and darker. It’s a very clever visual metaphor.

The drawings are quite detailed in places and pupils will enjoy soaking up all of the intricacies in some of the illustrations. Older pupils especially should be able to spot that the illustrations start with a predominately grey colour palette; as the boy’s problem grows, the illustrations become darker; however, when the boy confronts and deals with his problem, the illustrations gradually become more colourful. This is another great visual metaphor which could provoke great points of discussion.

“What Do You Do With A Problem?” is available on Book Depository for €12.20 in hardback.

(This is not a promoted post – I purchased this book myself after stumbling across it while looking for another book.)