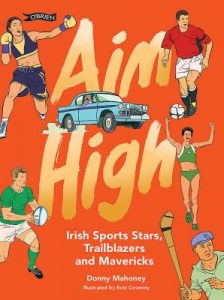 “Aim High” by Donny Mahoney, is a book based on Irish sportspeople. It has loads of different stories in one. Every page tells you about a different person and every paragraph explains a different part of their lives, for example their debut, the Olympics or their awards.

This book has some well-known recent stars such as Katie Taylor and Sonia O’ Sullivan and stars that I have never heard of and that are from the 19th Century such as Dan Donnelly and Dave Gallaher. It was also fascinating how all the women are from recent times. I loved all the different varieties of sports – one page it’s hockey, the next it’s cricket.

Some of the stories were 100 years ago so it was really cool to see how different sport was back then. At the end of some of the pages, they had a little paragraph about the sport or another famous person who played it, which I thought was really smart. The writing was amazing, but the illustrations were unbelievable!!! Everyone looked so real!

My favourite stories were Cora Staunton and Katie Taylor because I thought they were written the best. I also loved the teams at the end and the multi-sport page. The only things I would have preferred were if they wrote a bit more about their childhood and a bit more facts on the more well known ones but that doesn’t change the fact that it was an amazing book.

I would recommend it for 8-16 year olds but it is a book that anyone can read. Overall, I thought this book was fantastic and I would rate it nine and a half out of ten.