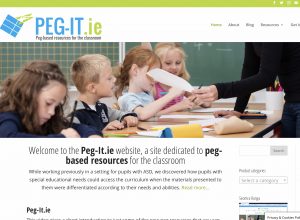 Our new baby, Peg-It.ie, a new website full of peg-based resources for SEN pupils as well as those in mainstream classes, has just been launched today. It’s based on pupils being able to indicate an answer to a task by clipping a clothes peg to an answer on a card, so it’s perfect for those with limited verbal skills or those with limited muscle control who would not be able to write an answer.

The website has been at the planning stage for about a year, but we’ve been working solidly on it for the past three months. We have developed lots of new resources across various aspects of the curriculum, most especially in literacy and numeracy, which use clothes pegs to indicate an answer.

During the five years that I spent teaching in a special class for pupils with ASD, we used this methodology to great effect and have used many of the resources contained on this new website with our pupils.

While these resources were initially intended for use with SEN pupils, they are also ideal to be used with a range of pupils in learning support classes or in mainstream classes, especially for Station Teaching in Literacy and Numeracy.

You can see the new site at Peg-It.ie

Many thanks to local company Format.ie who patiently worked with me on the development of this site and helped me to bring to fruition the vision I had for this new site.