Book Review: The Girl Who Thought in Pictures 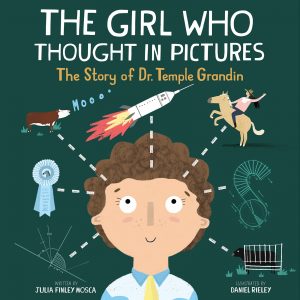 “The Girl Who Thought in Pictures”, written by Julia Finley Mosca and illustrated by Daniel Rieley, is a picture book published in 2017 based on the story of Dr. Temple Grandin, known in equal measures as a world authority on animal welfare as well as being an advocate for autism.

It tells the story of Temple Grandin in a way that is accessible to children with full page colour illustrations. It tells how Temple was “unique from the start” and a “shy loner” who hated loud sounds and crowded places and who was not averse to throwing a tantrum as a result.

Although she did not speak for some years, she found that she was a visual learner, that she could learn about the world by seeing pictures in her head. She was “Different, Not Less” as the book says.

After being kicked out of school, she spent some time on her aunt’s ranch, where she discovered her affinity with animals, especially cows. On enrolling in a new school she found what most pupils want – a teacher who believed in her. He instilled in her the notion that “when you find what you’re good at, like science – you’ll soar!”

It has lots of messages for pupils to learn, both for those with and without autism:

“Each person is special – so unique are our minds”;

“Being different might just be what makes you so neat”

The story of Temple Grandin in the book is told in verse, one aspect which didn’t appeal to me – that is just a personal observation when reading the book. I’d have preferred to read the story just as a story. However, that is not to take away from the overall enjoyment of the book which would be a great addition to any class or school library. The book would also be great for a session on CT & BT (Critical Thinking and Book Talk).

The publisher also has a website for this series of books: Amazing Scientists. Check out the “Printables” section of this website where they have links to resources to use in conjunction with this book, many of them on the Teachers Pay Teachers website. Most are free resources but some are paid resources.

I purchased the book on the Book Depository website for €12.72