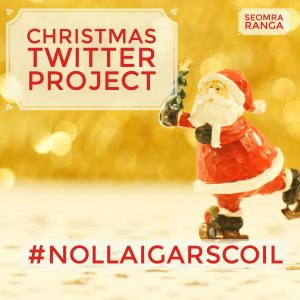 After the unexpected success of the Christmas Twitter Project last year, where so many schools Tweeted about what they were doing in their classrooms on the theme of Christmas, it was inevitable that it should return for a second year.

“Nollaig Ar Scoil” was the name of last year’s Twitter Project and the idea is really simple. Just Tweet with your pupils any time over the next two weeks about any Christmas-themed work that you are doing in your classroom or school. Even better, Tweet a photo of some of your work. To keep all of the Tweets together, use the following Twitter hashtag:#NollaigArScoil

To get a flavour of what schools and classes were Tweeting about last Christmas, have a look at the project transcript HERE (Part 1) and HERE (Part 2).

Our other Twitter Projects on Seomra Ranga have been a great success, with many teachers reporting how much their class enjoyed taking part and using a simple technology tool to connect with other classes across the country and internationally. Possible things you could Tweet about:

In taking part in the project, please be aware of good practice when sharing items through Social Media relating to pupils and classroom. Check out this advice on the Webwise wesite HERE

To make the project truly collaborative, don’t forget to reply to, comment on, or re-Tweet the Tweet of another school. So let’s build up a picture through Twitter of the sort of seasonal Christmas work going on in Irish classrooms in the run-up to the holidays.

Above all, don’t forget to use the project hashtag on every Tweet: #NollaigArScoil (You don’t need to tag Seomra Ranga in the Tweet to take part). You may wish to use a Twitter Client like Tweetdeck, Hootsuite or Twitterfall which will allow you to set up a specific column to view all of the #NollaigArScoil timeline Tweets as they come in during the week.

If you are comfortable with those simple conditions, then let the Tweets flow until the end of term. Again, don’t forget to include #NollaigArScoil in every Tweet so that it can be collated into the transcript.