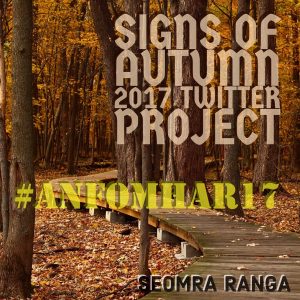 After a break last year when we did a Hallowe’en Twitter Project, we’re back with the fifth Signs of Autumn Twitter Project this year. This is a perfect opportunity for teachers, classes and schools who are on Twitter to use it for an educational purpose and to engage with other classes/schools. Using a simple technology tool to connect with other classes across the country and internationally is the essence of the Project.

The idea is really simple, and it’s the simple ideas that work best! Just Tweet with your pupils any time during the week, October 23rd – 27th, about any signs of autumn that you see in your classroom, school area or locality. Even better, Tweet a photo of the sign of autumn that you and your pupils noticed or observed. To keep all of the Tweets together, use the following Twitter hashtag: #anfomhar17

* Leaves falling from the trees

* Autumn colours that you see in your environment

Lots of teachers will have joined Twitter on Summer courses again this year, so this might be the perfect opportunity for you to Tweet with your class. Let other schools/classes that you are in contact with through Twitter know about the project and invite them to join in. Keep using the hashtag #anfomhar17

If you are in contact with a school abroad, get them to join in too to give the project an international dimension. A couple of years ago, some schools from the US and Canada joined in the project and my own class really enjoyed comparing the differences between autumn on this side of the Atlantic with the far side. We even saw photos of snow in a school grounds in Canada during the project.

To make the project truly collaborative, don’t forget to reply to, comment on, or re-Tweet the Tweet of another school. So let’s build up a picture through Twitter of what the Signs of Autumn in Ireland 2017 are during this coming week. Above all, don’t forget to use the project hashtag on every Tweet: #anfomhar17 You don’t need to tag Seomra Ranga in the Tweet, it’s enough to use #anfomhar17

You may wish to use a Twitter Client like Tweetdeck, Hootsuite or Twitterfall which will allow you to set up a specific column to view all of the #anfomhar17 timeline Tweets as they come in during the week.

To get a flavour of what happened during the last Project in 2015, view the project Transcript. It will give you some idea of what to Tweet about during the week.

A condition of joining in the project is that you agree to have your Tweets collated into the project transcript to be available as a download to all teachers through Seomra Ranga. If your class Twitter account is protected, you will have to unprotect it during the week to have your Tweets included in the transcript. If you are comfortable with those simple conditions, then let the Tweets flow from October 23rd to 27th. Again, don’t forget to include #anfomhar17 in every Tweet so that it can be collated into the transcript.