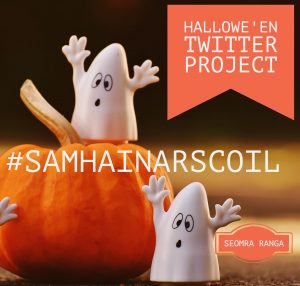 I’ve been so preoccupied with my own work at school, that I’d quite forgotten about organising the fifth Signs of Autumn Twitter Project this term. Given that Autumn is already well on the road and winter is gradually approaching, I thought that we might try something a little different for the final week before the mid-term break.

So, how about taking part in the Hallowe’en Twitter Project. The idea is really simple, and it’s the simple ideas that work best! Just Tweet with your pupils any time during this week, October 24th – 28th, about any Hallowe’en-themed work that you are doing in your classroom or school. Even better, Tweet a photo of some of your work. To keep all of the Tweets together, use the following Twitter hashtag: #SamhainArScoil

Our other Twitter Projects have been a great success, with many teachers reporting how much their class enjoyed taking part and using a simple technology tool to connect with other classes across the country and internationally. Possible things you could Tweet about:

To make the project truly collaborative, don’t forget to reply to, comment on, or re-Tweet the Tweet of another school. So let’s build up a picture through Twitter of the sort of Hallowe’en work going on in Irish classrooms during the week.

Above all, don’t forget to use the project hashtag on every Tweet: #samhainarscoil You may wish to use a Twitter Client like Tweetdeck, Hootsuite or Twitterfall which will allow you to set up a specific column to view all of the #samhainarscoil timeline Tweets as they come in during the week.

To get a flavour of what happened during the Signs of Autumn project last year, view the project Transcript. It will give you some idea of what happens during a Twitter project.

If you are comfortable with those simple conditions, then let the Tweets flow from October 24th to 28th. Again, don’t forget to include #samhainarscoil in every Tweet so that it can be collated into the transcript.