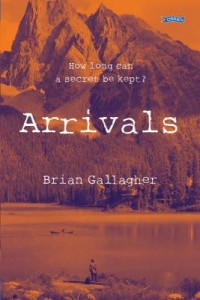 “Arrivals” by Brian Gallagher is a book about a girl called Ciara and her granddad who has just died. She goes to visit his home in Ontario, Canada. She is excited because he left her a letter. In the letter she finds a riddle. Together with her Dad, she solves the riddle and it leads them to a box. They find a manuscript in the box, of what really happened long ago, that her granddad swore not to tell about until the day he died.
In the manuscript- Granddad=Mike.

Mike was out fishing on the lake with his friend Wilson. Wilson was left behind at school for some of the summer holidays because his dad had an important job abroad and had to stay on. But Wilson is protestant and Mike is Christian. Wilson’s Dad didn’t like the idea of his son making friends with a Christian. Then they go to an island and meet Lucy, a girl from the Ojibwe tribe and they make a club called the G club. They can’t be friends in front of their parents because Mike and Wilson are white and Lucy isn’t. Lucy was at the scene of a murder where Brent Packham killed a man because the man threatened him. Brent said nobody gets away with threatening him and shot the man there and then. Lucy was in the boathouse where the murder scene was committed and was terrified. Thankfully she got away without Brent knowing she was even there. She told the G club and they made a plan.

They knew that Brent shipped illegal liquids to the States. So Mike said “If you killed a man and you shipped illegal liquids where would you put the body?” Lucy replied “I know! I would ship it away with my next load!” “Exactly!” said Mike. “So what shall we do?” Lucy enquired. “We’ll go to Peterborough today and I will pretend I am doing a project and I will try and find the body in Maple Brewery.” Wilson was a bit shocked at this idea and tried to convince them not to but they had their minds set. They were going to Maple Brewery today.

* They have left*
They were going to get the train. But when they arrived Lucy had a problem. The Indian agent who was in charge of her tribe, Mr. Staunton was there. Lucy got Wilson to distract him while she and Mike hid. Eventually he walked away and they boarded the train. Soon they were at Maple Brewery, Peterborough. Mike was a little nervous but he knew it had to be done. He went on in with a convoy of Lorries and had a look around. One of Packham’s workers spotted him and enquired what he was doing there. Mike said he was doing a project at school on Maple Brewery. The man said that next time he is doing a project get permission first and set him away.

Wilson and Lucy asked straight away what had happened. He told them everything. They were a little disappointed at first but headed home. They made a plan the next day to go that night, sneak in when nobody was around.

*Night time and they have headed off*
This time they walked to Peterborough as they didn’t want to take any chances. Soon they arrived. They all entered together but all split up.
Lucy went one way and found a load of water coming out of a crate. “This must be it” she thought excitedly. She knew that Packham probably would have packed the body in ice. She tried to open it but it was no use. She decided to go and find one of the boys to help her. She stumbled into Mike and told him everything. Then, together they headed back to where the crate was. Suddenly, they heard cries. “Wilson!!” they whispered to each other, oh no!

Meanwhile Wilson had heard someone talking on the phone. He looked round the corner and to his fear there was an office- with Packham in it!! He quietly curved round the crates and tried to get away before Packham realised someone was there. He tripped on a bottle and there was a clang. He hoped that Packham hadn’t heard it! Suddenly the phone went down and the office door opened. Packham came out. “WHO IS THERE???” he yelled. Wilson knew he had been discovered. He ran for his life. He ran up a long row of crates and rounded a corner- right into Packham. Packham caught him and brought him into the office.

“WHAT IS YOUR NAME?” He demanded. Wilson replied “Uhhh”.. “TELL ME YOUR NAME” Wilson refused and Packham went over to a sink and filled it. He got a hold of Wilson and shoved his head in it. Wilson spluttered. He let him up again. “NEXT TIME I WILL LET YOU DROWN! NOW WHATS YOUR NAME???” “Wilson!” Wilson shouted. “OK, ARE YOU HERE ALONE AND WHY ARE YOU HERE??” Wilson told him everything. Packham grabbed him and sat him down on a swivel chair. He got some cord and tightly tied Wilson’s arms down. Wilson cried in pain- that was the cry Lucy and Mike heard.

They ran to find Wilson. Packham knew that Mike and Lucy were here because he had made Wilson tell him absolutely EVERYTHING. Packham now called out to Lucy. By now Lucy and Mike were separated. Packham spotted Mike. He called out to him to come as there was no escape, all the doors were bolted tight. Packham chased Mike up really high, onto the catwalks. He cornered Mike, sure he had him now. Mike called out a warning to Lucy. Packham twisted Mikes arm and made him scream. He called out to Lucy that he had shot Mike and he was losing blood quickly, to turn herself in now and he would save Mike, which of course was untrue. But Lucy believed him and ran to find Packham. She found him quick enough, to discover that Mike was actually fine. She was outraged, but Packham had seen her now. He quickly got both together and took out a gun. Little did he know that Wilson had escaped and was climbing up the metal stairs right now. Wilson yelled at him and Packham was distracted. Lucy quickly undone her coat and pulled out her secret weapon, a Bowie knife. She yelled and stabbed him in the chest. Packham was now firing off shots, trying to hit Wilson as Wilson had had a broken glass bottle in his hand and had fired it into Packham’s eyes, all little bits of it. He now made for Mike and Mike used a wrestling trick he had learned to throw Packham over the banister and fall, fall, fall and THUD, hit the ground. “Oh Lord”, said Lucy “I think we’ve killed a man”. They quickly ran down and Mike grabbed Packham’s gun and aimed it at him while Lucy checked his pulse. Nothing. “What will we do?!?!”Wilson asked. “Leave him, he got what he deserved” Lucy replied. They quickly left the brewery and went home, decided to swear to tell nobody until the day they die.

And that is the story!

I think this book is brilliant. It was really hard to drop it.