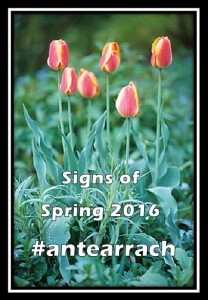 It’s that time of year again for our Signs of Spring Twitter Project 2016. With Easter falling so early this year, it’s better to do this project before, rather than after, Easter. This will be our 5th year of this event and it gives teachers and pupils a chance to look about and observe the signs of Spring in their environment.

We’ve done a Signs of Autumn (#anfomhar) and Signs of Spring (#antearrach) Twitter Projects for the past five years and classes seemed to really enjoy these. Hopefully, we can build on the success of previous projects and get even more schools and classes involved.

The idea is simple. Just Tweet with your pupils any time during the week of March 7th – 16th about any signs of Spring that you see in your classroom, school area or locality. Even better, Tweet a photo of the sign of Spring that you and your pupils observed. To keep all of the Tweets together use the following Twitter hashtag: #antearrach

There are lots of classes on Twitter now and some may have recently joined so this might be the perfect opportunity for you to Tweet with your class. Let other schools/classes that you are in contact with through Twitter know about the project and invite them to join in. If you are in contact with a school abroad, get them to join in too to give the project an international dimension.

If you have your own class/school blog, you could get pupils to take Spring photos at home, upload them to the blog and then post them to the Twitter Project the next day. You could also post links to articles your class have written about Spring on your class/school blog. Why not even get parents/grandparents involved in the project?

To make the project collaborative, don’t forget to reply to/comment on the Tweet of another school and get a conversation going. So let’s build up a picture through Twitter of what the Signs of Spring in Ireland 2016 are during the week. You may wish to use a Twitter Client likeTweetdeck (which I use in class), Hootsuite or Twitterfall which will allow you to set up a specific column to view all of the #antearrach Tweets as they come in during the week.

A condition of joining in the project is that you agree to have your Tweets collated into a project transcript to be available as a download to all teachers through Seomra Ranga. If you are comfortable with this simple condition, then let the Tweets flow from March 7th– 16th. Again, don’t forget to include #antearrach in every Tweet so that it can be collated into the transcript at the end of the week.