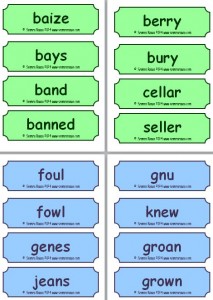 Pelmanism is the name of the memory game which you play by turning up pairs of cards from a pack and trying to pick out matching pairs. It is named after the Pelman Institute which was set up for the study of memory in London in the 1930s.

This oral language memory game focuses on homophones (words that sound the same but are spelled differently). There are three sets of sixteen cards (eight pairs) in this pack, 48 cards in all. The game can be played initially using one set and as the pupils become proficient, another set can be added.