Apps for Pupils With Autism 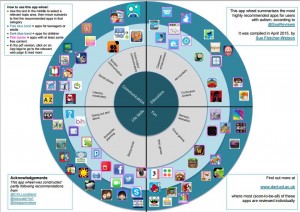 Sue Fletcher-Watson is a developmental psychologist, working at the University of Edinburgh. She has a special interest in developmental disabilities, and autism in particular. Research and projects that she is involved with are featured on the DART (Development Autism Research Technology) website. The website also contains app reviews, which is how I came across the site some time ago.

Sue has just published on the site an App Wheel which summarises the most highly recommended apps for users with autism. There are recommended apps for teenages/adults as well as apps for younger pupils. The apps are categorised by primary function – Communication, Education, Life-skills and Fun. Within each of these categories, the apps are further categorised, so, for example, in the Life Skills category the apps are grouped by “Going Out and About”, “Schedules/Planning” and “Being Social”.

I’ve seen other app wheels before, but what makes this one stand out for its “user-friendliness” is that the app icons on the wheel are hyperlinked to either the developer website or to the iTunes Store link. This makes the business of deciding on which apps to download very easy for the teacher/parent. Some of the app icons on the wheel are also bordered in pink, signifying that the app has at least some free content.

The PDF of this App Wheel should be bookmarked by all teachers, but perhaps especially those teaching SEN pupils and pupils with autism. The App Wheel can be downloaded on the DART website HERE