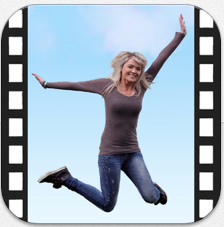 As I have a child with Down Syndrome, I’m always looking for educational materials for him. I came across an App called Actions in Video, which was launched in Cork on April 5th. Geraldine Moran, who developed the App, is a Speech and Language therapist. She knows that children with Down Syndrome are visual learners, but sometimes it can be difficult to teach concepts from still images.

The app teaches 49 everyday action words. Each action has three individual videos so that the child can see the action in different contexts. Once the child has looked at the video, they put this into a sentence. There are two sentence structures: Person and Action, and Person, Action and Object. Eg: The man is kicking the ball. There are three difficulty levels for each verb. When the correct sentence is chosen, you listen to the sentence and record the child’s voice saying it. I love that it’s Irish voices in the app!

We’ve been using it in school with a child with Down’s Syndrome who’s in Senior Infants. The Resource teachers liked the user friendly, easy to use 4 step approach. The child can recognise real people performing real actions. There’s no sounds with the video itself, which we found great as it focusses on the action.

Very importantly, the child has learned to structure sentences, which is made easier for her through colour coding. This can be removed to increase the complexity for her later on. She has gained confidence in her speech and loved hearing herself speak the sentence! We had found it hard to get her to use the word “is” in a sentence, but this has made a huge difference. It has encouraged her to use a wider variety of verbs in her vocabulary.

There’s a free sample pack which allows you to trial before you buy it. It’s pricey at €29.99 but I haven’t come across anything as good for structuring language. It’s the first App of its kind to use real people. It can be used with any child with language delay, with autism, specific language impairment or those using English as a second language.

You can visit the website on www.actionsinvideo.com and check out the App and its features for yourself. There are speech therapy hints and tips there to help you to get the best from the App. I would highly recommend every school to try it out.