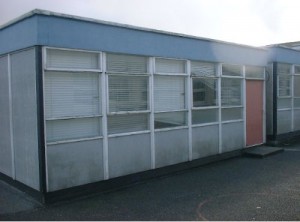 The Minister for Education and Skills, Ruairí Quinn, has announced an allocation of €15 million towards the next phase of the Prefab Replacement Scheme for 2014. It is estimated that over 2,600 pupils in primary and second level schools around the country will move into permanent accommodation from prefabs in 2014 under the scheme.

“The prefab replacement initiative has been a great success, with over €37.2 million spent to date, 129 projects completed, and a further 29 projects on site. While these are the figures, in reality it means that thousands of pupils and their teachers finally have a quality roof over their heads – often after many years of teaching and learning in prefabs.

It is a real scandal that during the building boom years of the so-called Celtic Tiger, so many of our children were educated in sub-standard prefabs. I am personally committed to eliminating prefabs which have become ‘permanent’ structures.”

After all projects have ben completed under the Prefab Replacement Scheme, the estimated per annum rental savings is estimated to be some €5 million.

This will be welcome news to lots of schools around the country who have had to endure the education of pupils in prefabs for many years. There are some terms and conditions attached to participation in the scheme – one interesting one is that if schools choose to include a link corridor to the prefabs, this and associated works to the existing buildings will be a matter for the school authority.

Nevertheless, school principals and Boards of Management (BOMs) will be delighted to be finally able to plan for the education of their pupils in a permanent classroom in the not too distant future.