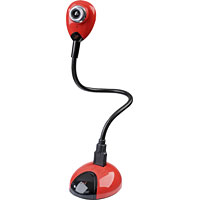 Hue HD Webcam is a neat webcam that can be plugged straight into a USB port on your PC/Laptop. Alternatively, it can be inserted into a freestanding base which can then be plugged into your PC/Laptop via USB. Many schools are beginning to use this webcam as a document camera/visualiser. Given its retail price (€35.94), this should prove to be a popular alternative to more expensive visualisers for cash-strapped schools.

I’ve been playing around with this webcam this afternoon, and it will certainly be very adequate for most school settings. It is light and comes in five different colours. Setting it up was very easy – the driver loads when the webcam is inserted and a CD also comes with it which contains extra video software, a user manual and Skype set-up. I found focussing the camera a bit fiddly but that is something that you’d probably get used to. Objects displayed under the webcam were clear and sharp and you can take snapshots of the object while under the camera. When I put a typed sheet under the camera, I had to turn it upside-down to allow the text to be read onscreen. Unless I was doing something wrong, this could be a little tricky in class.

However, overall, I’d say that this is a really inexpensive alternative for teachers who don’t have a visualiser in their classroom. I’ve had a visualiser for the last couple of years and got so used to having it, was lost when it was broken.

Hue HD also have a stop motion animation kit called Animation Studio. This comes with the Hue HD Webcam as well as the software that will allow pupils to create their own animations. It comes with a setup/installation guide and a pack of plasticine to help pupils get started on their first animation. This retails at €59.94 which is quite a reasonable price.

Both the Hue HD Webcam and Animation Studio are compatible with Windows and Apple Mac. They can both be purchased from the Hue HD online store HERE

Hue HD have kindly given me both a Webcam and an Animation Studio (containing the webcam and animation software) to give away for a competition on the site. I think that this is a prize that lots of teachers will want to win. To be in with a chance of winning either of these prizes, do the following: using the letters from HUE WEBCAM, come up with three words of at least four letters, fill them in the form below together with your own details and submit the form. All entries for the competition must be in by 6pm this Friday October 11th. Only one entry per teacher is permitted. The winners of the prizes will be announced on Twitter after this time.

Please make sure that you give a contact email address that you can be contacted on immediately after the competition closes as teachers have forfeited prizes by not answering their emails! Again, many thanks to Hue HD for sponsoring the prizes for this competition. Good luck to all.