Like many teachers, I kept one eye on Pinterest over the summer months for new ideas for my classroom. One that kept grabbing my attention was that of the ‘exit ticket’. It appeared in many formats, such as post-it notes and grids, but the one I decided to use was the Twitter format. Over the past eighteen months, I’ve been studying Assessment for Learning in St Patrick’s College, Drumcondra and my favourite formative assessment methods are similar to Twitter – short, snappy and the source of instant feedback! I began using exit tickets with my fifth class boys at the start of September and so far, it has been a popular addition to classroom life. 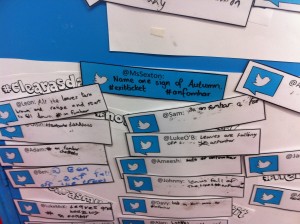 My Twitter board sits on the back of my classroom door and is made up of three ‘feeds’. The first is a newsfeed to encourage the students to share their news from the previous day – a nice way to catch up with students who sometimes get drowned out by the big stories! The second is the exit ticket and the third is a feed to discuss what they’ve learned that day. The exit ticket consists of a short task to be completed or a question to be answered. I laminated each of the ‘tweets’ and used Velcro to attach it to the board. This means that they can remove their ‘tweet’ and fill it in at their desks with a whiteboard marker. It would also have been a good idea to laminate the A2 sheets they attach the tweets to, as I can see the wear and tear on the boards already. The exercise should only take 2-3 minutes, which includes collecting the tweet and whiteboard marker, filling out the exit ticket and returning it to the board! 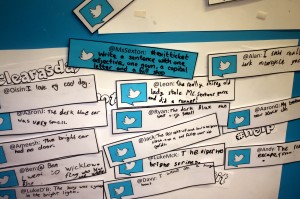 The exit ticket itself takes a number of forms. Sometimes it’s an open-ended question about the class novel, sometimes it’s a short task related to Maths. At other times, I ask them to put their Irish spellings into a sentence, while at other times I might ask for an opinion on a specific topic. The purpose of the exit ticket is usually to conclude a lesson, revise the content or demonstrate that they have achieved the objective of the lesson. The exit ticket is often linked to my shared learning intention and success criteria (WALTs [We Are Learning Today] and WILFs [What I’m Looking For]) for a particular lesson. At other times, it’s an opportunity to brainstorm for the topic in the afternoon. As you can see from the photos, unless it’s a specific task related to spelling or handwriting, content is a more of a priority! Finally, the most important thing for the teacher is to review them, to clarify answers and to note anyone who needs extra help – and to point out the odd answer worthy of a retweet! 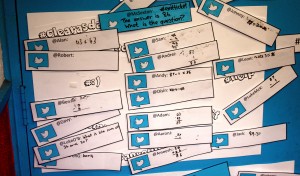 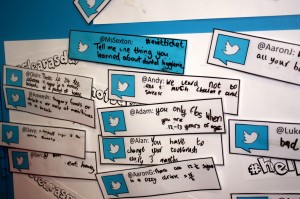 Martina Sexton has been teaching in St Peter’s Primary School for the past eight years. St. Peter’s Primary has a school blog at www.stpetersbrayblog.com and can be found on Twitter @StPetersBray.