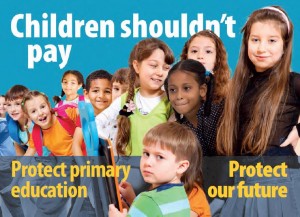 It’s rare on Seomra Ranga that I venture into the world of political comment as I believe that it’s not the purpose of the site and there are many other ways and other forums for people to express their views on how education is run in this country. However, the threat to education provision in this country, through the expected rise in the pupil-teacher ratio in the upcoming budget, has forced me to make some comments on this issue.

The INTO, IPPN, National Parents Council (Primary), Church of Ireland Board of Education, CPSMA, Educate Together, An Foras Pátrúnachta, Gaelscoileanna, National Association of Boards of Management in Special Education have launched a joint pre-budget campaign – National Alliance for Primary Education (NAPE) – to save primary education from further cuts. The campaign includes a request to schools to issue postcards to parents to send to their local TDs with a clear message that our pupils should not suffer and have to pay for their primary education because of the failure of banks and developers.

Seomra Ranga would like to endorse this campaign and encourage teachers to do likewise. The Minister for Education, Ruairí Quinn, announced cuts to special education in late June and very quickly reversed them due to the bad publicity his proposals received. However, he is insisting that cuts to the education budget have to come from somewhere and rumours of €100m in cuts have been circulated in recent weeks. Whether these are true or not, the threat of an increase in class size still looms large on the horizon. This would be disastrous to primary education.

In a recent Irish Times article, Minister Quinn said that we had a long way to go to have the kind of “world class education system that we need to have”. He further said that this was an “assertion based on no evidence whatsoever other than something of a feelgood factor that was communicated to us at home by the greater Irish diaspora who felt, for whatever reason, that it was better than what their children were experiencing in other parts of the world.”

Now if the Minister wants us to provide that “world class education system” including the increase in standards of literacy and numeracy that he has championed, then surely even he must know that making the rumoured €100m in cuts to the education budget, including a rumoured increase of two in the pupil-teacher ratio, will do nothing to help him achieve his aim. The reality is that such devastating cuts to education will negatively affect the educational opportunities of a generation.

Perhaps the €100m rumour is just “spin” and “kite flying” on the part of the Minister and his advisors, hoping that people will concede that maybe €50m in cuts would not be too bitter a pill to swallow. In times of recession, we should be thinking of the future and investing in education. As the motto on the NAPE postcards says: “Protect Primary Education – Protect Our Future”.