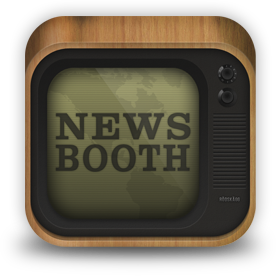 News Booth is an app which allows you to turn photographs or pictures into something which looks like a screen grab from Sky News or some other such news channel. I recently came across this app at the CESI conference in February and decided to try it out in the classroom. The app allows you to import a photograph and add a headline and sub-headline to it to give it that authentic “newsy” feel. Once I saw it, I knew that the app would make a great addition to a literacy lesson.

We had been reading the novel “Rosie’s Quest” by Ann Carroll in class and the pupils were really enjoying it. It is the story of a girl who has an accident and travels back in time to 1960’s Ireland, the time of her mother’s childhood. There, among other things, she encounters the school bully Agnes Balfe. We selected two scenes from the novel and used the News Booth app to illustrate them. Pupils drew pictures of the characters which we photographed with the iPad camera. We then composed headlines to go with the pictures. This in itself was a great exercise as the pupils had to learn how to explain an incident in a short succinct headline. 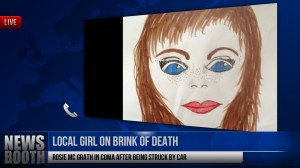 News Report relating to the Theft of Money from a Shop

I really like this app, as did the pupils. It just added a different approach to a literacy lesson and certainly grabbed the pupils’ attention. The app is available in the App Store for iPhone/iPod and iPad. I’m not aware of the app being available yet for Android devices. It is a free app but there are two in-app purchases for 89c each that give you two more template theme packs. I’d really recommend this app to add a different dimension to literacy lessons. More information on the app can be read on the News Booth website.