A History of Ireland in 100 Objects 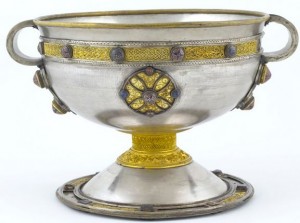 To mark Ireland’s Presidency of the Council of the European Union and to celebrate St. Patrick’s Day, a new free app/ebook has just been released called A History of Ireland in 100 Objects. The development of this app/ebook has been a collaboration between The Royal Irish Academy, the National Museum of Ireland, The Irish Times, the EU Presidency, the Department of Foreign Affairs and Trade and Adobe. It is available as an interactive app for Apple iPhone and iPad, for most Android tablets and on the Kindle Fire, from the Irish EU Presidency website or the 100 Objects website, as well as associated App stores. You can also experience the book on your computer, smartphone or eReader.

This is a fantastic app/ebook which should appeal to all primary teachers and especially history teachers in secondary schools. The layout of the app is extremely clear and navigation is really easy. As you scroll through each of the 100 objects, the first thing that you’ll notice are the images – they are so sharp and full of detail. Given that some of the 100 objects are hundreds of years old, it is fascinating to be able to see them up close in such high definition. It’s possible that you will get a better view of many of these objects by using this app than by visiting the real thing in a museum. You can zoom into some of the images and look at them in minute detail, which may appeal to art teachers. Some of the images can be rotated to get different viewpoints of them.

As well as viewing images of these 100 objects, there is an article that you can read about each object as well as a selection of podcasts, videos and other images associated with the object. You can also view a map associated with each image which gives information about where the object can be seen in real life. The app also takes advantage of social media, so you can share information about the object via email, Facebook, Twitter and Pinterest.

I think that this app would be a great addition to the resource bank of teachers and would be a fabulous visual aid in the classroom as a stimulus for discussion, research and work on the social history of Ireland. There will be a book of these 100 objects released soon. However, if you want the app, you will have to move fast as it is only available as a free download until the end of March.