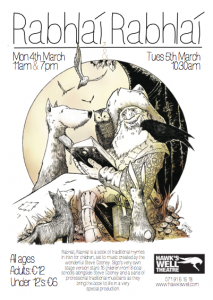 “Rabhlaí Rabhlaí“ is a collection of 31 traditional poems and rhymes “as Gaeilge”, a copy of which should be in every primary school in the country. It is especially suitable to be used in junior classes. Pupils in these classes will undoubtedly find the rhymes engaging and they will certainly motivate them to learn and have fun with rhymes as Gaeilge.

For any teachers in the Sligo region, I’m directing a stage version of the book for the Hawk’s Well Theatre. Pupils from various schools in Sligo will be taking part in the production. The production is part of the first Sligo Children’s Book Festival which also coincides with Seachtain na Gaeilge. This is an opportunity to bring your class to a production which mixes Irish poems and rhymes with dancing and traditional music played by some of the country’s top traditional musicians.