Seomra Ranga has won the prestigious Best Individual Blog at the 9th annual international Edublog Awards held online last night. It was a truly unexpected win as I had presumed that the might of the larger US and UK blogs would prevail. There were originally 139 nominations from all over the world. This was whittled down to a shortlist of 44 blogs which were then put to a public vote. Again I thought that the greater education communities in the UK and US would easily surpass the votes I could muster from supporters in Ireland.

It was a long night last night as the ceremony only commenced at midnight Irish time. I awaited eagerly to see if any of the other Irish nominees would win in their categories. I was disappointed that #EdchatIE didn’t make it to the final five in the Best Twitter Hashtag category. Only Fred Boss of NCTE was a runner-up in the Best Individual Tweeter category. My category of Best Individual Blog was the second last category to be announced well after 1am. I still wondered at the wisdom of staying up so late on a school night to see what I presumed would be a US win in such a hotly contested category. Then I saw the next slide appear on screen: 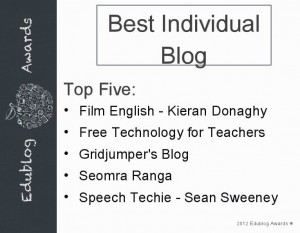 I was more than surprised to see that Seomra Ranga had made it into the final five and I would have been quite pleased if that had been it, to have been associated with such company. However, I hadn’t banked on the Irish education community supporting the site to the extent that it did. The next slide truly stunned me! 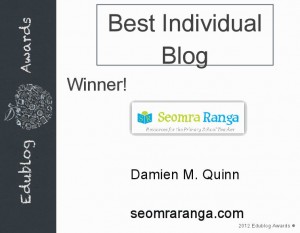 I was amused at the US hosts trying to pronounce the name of the site. I was still flabbergasted as I tried to compose a few words of thanks to say live online, still in a daze at a truly stunning and unexpected win! It was great that Fred Boss from NCTE was there online with me to share in the occasion as we had a conversation with the hosts online after the ceremony. It was only then that I realised what had been achieved. One of the hosts informed me that in many of the categories, only a couple of votes separated the winner from the rest. But she went on to say that Seomra Ranga had won the Best Individual Blog quite easily with 76 votes to spare over its nearest rival!

I’m still amazed today at the win. My pupils were genuinely delighted for me as they took a real interest and had been voting for me. I owe a great debt of gratitude to all of the people, especially Irish educators, who took the trouble to vote for the site over a number of days and made this award happen. It’s a great endorsement of the site and makes the endless hours of work that goes into the site all worthwhile. It was also great to find some Irish educators, nightowls, on Twitter last night to share in the great win with me. Many thanks to the many people who have contacted me today through Facebook, Twitter and text with words of congratulations. Thanks to you all. Míle buíochas!