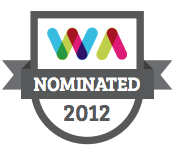 The Irish Web Awards are being held in the Mansion House, Dublin on November 1st. I just found out today that Seomra Ranga had been nominated for an award in the “Best Education and Third Level Website” category ages ago, and I didn’t even know about it! The nominations were then whittled down to a Short List and whittled down further again to a list of Finalists. Seomra Ranga didn’t make it to either of these lists! In any case, it was nice to know that the site had received a nomination in the first place!