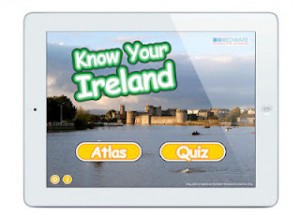 Many teachers will be familiar with the great “Know Your Ireland” geography software for schools from the Irish software company Edware. This company also produces other similar geography titles: “Know Your Europe”, “Know Your USA”, “Know Your World”. Edware has now released a “Know Your Ireland” iPad app available in the iTunes App Store. We all know that it can be really difficult to find apps that are specific to the Irish curriculum and to Irish classrooms, so I was delighted to read about this new release.

I downloaded the app and decided to use it to revise some geography work with my 6th class. I connected the iPad to the IWB to view the app. At the moment, the app is confined to the learning of the counties of Ireland. When you click on the atlas, it takes you into a map of Ireland with a pin in each county. Clicking on the pin announces the name of the county, shows its county crest and gives options of seeing a photo and getting some information on the county. The photos appear in a pop-up window with a short explanation underneath. The photos are really clear and give a glimpse of a place of interest in each county. The “info” pop-up window follows the same structure for each county: it gives its location and province; tells a little about the county; gives points of interest; tells where the county name comes from; tells what the most popular attractions of the county are; gives statistics on province, county town, area, population and number plates.

When pupils are familiar with the counties of Ireland a quiz can be taken on the app. The quiz consists of a map of Ireland with pins in each county. When you start the quiz, a voice announces the name of a county and its name appears at the same time on screen. Pupils have to tap the correct pin of each county. The quiz is timed and when all counties have been “pinned” the app tells what your time was, what percentage of correct answers you got and what your score was.

At a cost of €2.99 in the iTunes App Store, the app is probably more expensive than a lot of other similar type apps, especially given that at the moment you can only revise the counties of Ireland on it. However, the Edware Blog reports that by the end of 2012 there will be many updates to the app with physical features and towns appearing on the app soon. Overall, this is a welcome addition to the App Store for Irish educators and I am looking forward to seeing how the app develops over the coming months.

My 6th class pupils enjoyed the revision class using the app and it held their attention for quite a while. They haven’t taken the quiz yet, but it’s sure to awaken their naturally competitive streak!

The app is only available for iPad at the moment. I’m presuming that it was felt that the app would not work that well on the smaller iPod/iPhone screen. An Android version of the app is expected before Christmas.

The app can be downloaded HERE.