From Teaching Space to Learning Space

Last weekend, I attended the very successful ICT in Education Conference in LIT Tipperary, which had as its theme “Learning Spaces“. The Keynote (if you could call it that, as it was the most “unKeynote” speech most participants had seen) was delivered (perhaps facilitated would be a better word) by Ira Socol and Pam Moran. Ira teaches in Michigan State University and Pam is Superintendent of Albemarle County Public Schools, Virginia, USA. Both are passionate advocates of the concept of “educology“, the study of the complete environment which creates an educational experience, which sees that the use of Space, not Place, increases traditional measures of achievement while building critical thinking skills, critical analysis skills, and global collaboration skills.

Over the weekend the conference participants were constantly challenged to think about the “space” in their classrooms where children are learning. Ira told us that a child in school actually has three teachers – other pupils, the teacher and the learning space (in that order). So we were all challenged to think about one change that we could make on Monday morning in our classrooms that would make the space in our classrooms more conducive to learning.

With that in mind, I set the tone of change first thing Monday morning. The pupils probably thought that I was possessed as I proceeded to dump the teacher’s table from the front of the room to the back and created a new Learning Space, with the following result: 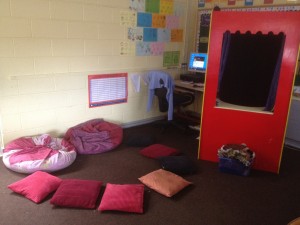 I really needed the excuse to de-clutter and the pupils liked the new Learning Space. The teacher’s table and two spare tables have been removed, all the general clutter has been tidied up. A nice new area with beanbags and cushions has been created. At the pupils request, we’ve put the puppet theatre at the front of the room where they want to put on puppet shows!

The creation of this new Learning Space is timely as we are starting a bloc of Station Teaching with my class over the next few weeks. With a focus on Literacy skills, we will be using this new Learning Space a lot as one of the four “stations” that pupils will be working in during this time. I’m lucky that I work in a school where people are encouraged to try out and test new ideas and colleagues were supportive of my efforts to make “small changes” to improve the learning experience of pupils. The pupils are also supportive of this new initiative and it remains to be seen over the next few weeks how this new “Learning Space” works out.