After the recent blunder with the Teaching Council having to re-issue thousands of election ballot papers because of typographical errors, now comes the news that the vast majority of the teaching profession refused to engage in the election process. The Teaching Council has just released details of the election process which show that none of the constituencies for either primary or post-primary teachers showed a turnout of even a paltry 10%. 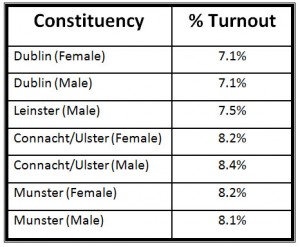 The above table shows the turnout for all of the primary constituencies. Kathleen O’ Connor was elected unopposed in the Leinster constituency as no other female candidate was nominated. The highest percentage turnout in the primary sector was for the male panel in Connacht/Ulster where, incidentally, there was a draw after the second count and John Conlon was elected by virtue of his higher number of first preferences on the first count.

However, the dismal turnout must surely be symptomatic of the mood of teachers and reflect the poor regard in which the Teaching Council is held within the teaching profession. This means that the newly elected council will have a difficult task in convincing the teaching profession of the necessity of having the Teaching Council as a regulatory body, despite the proposal to reduce the Registration Renewal Fee from next year. The job of the new council, and indeed the new CEO who has still to be appointed to replace Áine Lawlor, will be to win over an unconvinced teaching profession.

Download the full results of the Teaching Council elections HERE