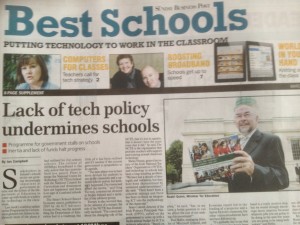 I received some Tweets yesterday informing me that the Sunday Business Post was going to be publishing a supplement in today’s edition on technology in schools. I was really interested to find out what developments in technology in education were in the pipeline. So, with great expectation, I made sure I purchased a copy of the paper this morning. The eight-page supplement was entitled “Best Schools – Putting Technology to Work in the Classroom”. It was reasonable to expect, therefore, that I was going to read articles on best practice in technology integration in schools. However, this was an exercise in deception on the part of the Business Post. It would have been more honest of them to headline the supplement “Advertorial”. I don’t know why I was so disappointed because we have seen these sort of supplements before.

The only impartial articles in the supplement appeared to be from Seán Cottrell of the IPPN and Sheila Nunan of the INTO. Almost all of the other articles contained were from senior people in the technology industry with something to sell. Indeed it appeared to me that if you purchased an advertisement for the supplement, you were rewarded with a feature article. Gill and Macmillan, Sage School, Steljes Ireland, Folens, Rits, UPC, Big Red Book, Easy Payments Plus, Edco all took out adverts in the supplement and all of them had an article about their product and quotes from one of their senior people. Many of these people said things that many of us agree with, but it was just the sense that these people were only saying these things because they were paid-up advertisers which led to a feeling of deception.

Now I understand that the Business Post has to sell advertising space to try to cover its costs. However, a little bit of balance would have been welcome. If you are going to call a supplement “Best Schools” then surely a couple of articles highlighting best practice in technology in schools could have been included. There was barely a mention in any of the eight pages of any schools or what they were doing integrating technology with the curriculum. There is a lot of good work being done across the country by individual schools and teachers with technology and this was a missed opportunity to tell the country that despite cutbacks schools were doing good work. Even a brief mention of teachers engaging in informal CPD on EdchatIE every Monday night might have encouraged other schools and teachers to engage more with technology in the classroom.

So Sunday Business Post, next time you are running with a supplement called “Best Schools”, perhaps a school or two could be included rather than just the heads of business with a vested interest.