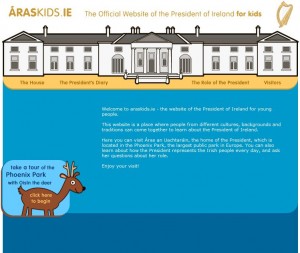 Áras Kids is the children’s website for Áras an Uachtaráin. Considering the publicity associated with the presidential election at the moment, it might be an opportune time to introduce pupils to the residence of the president. The website has two sections – one detailing the official residence of the president and the other detailing the facilities and buildings in the general Phoenix Park area. In a section on the house itself, you can take a virtual tour of rooms in the house such as The President’s Room, the State Reception Room, the Council of State Room, State Drawing Room, the Library, the Francini Corridor and the Entrance Hall. There is an example of a Day in the Life of the President to give pupils an idea of the work that the President does. There are some photos of the President greeting visiting dignatories as well as on her official engagements. Another section details the role of the President and it outlines the powers that are associated with the office of the President.

The other major section of the website gives pupils an idea of the buildings and facilities that are also located in the grounds of the Phoenix Park. Pupils can find out about the Wellington Monument, Dublin Zoo, Farmleigh House, Magazine Fort, The Phoenix Monument and the Ashtown Visitor’s Centre. In each of these sections, pupils can play a short game.

This is a great website to introduce pupils to the role of the President and the life that surrounds the President in Áras an Uachtaráin and the surrounding Phoenix Park. The website can be located at www.araskids.ie