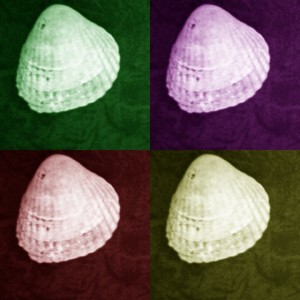 In June we did some work in the Visual Arts curriculum about Andy Warhol and the Pop Art movement in the 1960’s. We used Google Images to look at and respond to some images from this period in art history. We paid particular attention to the structure of pieces of art created during this period and especially how common, everyday objects were used to create pieces of art. We also looked at how portraits got the Pop Art treatment – who can forget the iconic portrait of Marilyn Monroe by Andy Warhol?

I decided to integrate technology into our Visual Arts work to create our own pieces of Pop Art. The pupils were asked to move around the classroom and, using the still camera on the iPod Touch, to take a photograph of any object in the classroom. They took photos of objects such as a chair, a drink bottle, a pencil case, a highlighter marker and even a piece of bread from someone’s lunch box. After saving the image to the camera roll, they then imported the image into the Photoshop Express app on the iPod. They firstly had to crop the image getting rid of any surplus space around the main image. Then they used the effects menu to create a Pop Art image, multiplying the image by four. Some did this twice creating a picture with the original image repeated sixteen times. The pupils also experimented with different colours and borders. They then saved the image and transferred the image to the teacher’s iPod using the Bump app. These were then transferred top the class PC and printed out. They looked great on the classroom wall. The pupils repeated the same procedure to take a photograph of themselves and turning it into another piece of Pop Art. This was a really enjoyable Visual Arts lesson. I’ve only now gotten around to putting the images together into a short movie created using Animoto, which creates video slideshows using any of your images. I hope you enjoy it.