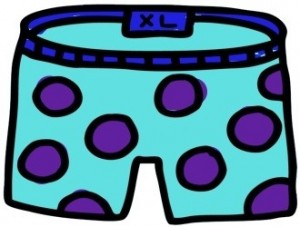 One app that we used on our class set of iPod Touches during the past year that the pupils particularly liked and enjoyed was the My Underwear app. The app is based on the “Underwear Do’s and Don’ts” book by Todd Parr. Whatever it is about the mention of the word “underwear” in the school setting, just sets the pupils into the fits of giggles. However, once the giggles were out of the way, the pupils really enjoyed working on this app. The app is really bright and colourful, a particular trademark of Todd Parr’s work. There are four activities to do on the app: design underwear, underwear matching game, monster eating underwear game and pin the underwear on the animal. The most popular part for the pupils was designing their own underwear. They firstly choose a shape underwear that they wish to design and then they use the painting tools to colour the underwear. There are also “stamps” that can be placed as patterns on the underwear. When that’s done, they simply save the image to the camera roll on the iPod and, using the Bump app, transfer the image via Wi-Fi to the teacher’s iPod. These were then all transferred to the PC and printed out. The pupils underwear were then proudly hung on a “washing line” across the classroom for all to admire, even those passing by the open classroom door! The underwear were even put on display on a line in the school hall for a parents’ evening for all to see. Below is a video of the underwear designed by the pupils and also a video about the My Underwear app. Enjoy them!