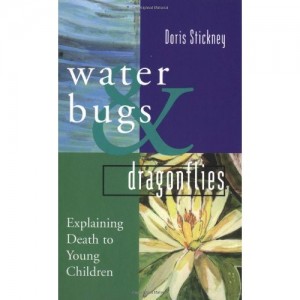 After a recent bereavement in school, when a member of staff passed away suddenly over a weekend, our staff discussed at length how to deal with the situation in school on the Monday morning. A teacher in a local school told me about a book that they used in their school following a bereavement. It was called “Water Bugs and Dragonflies” by Doris Stickney, with the subtitle, “Explaining Death to Young Children“. It’s a beautiful story, full of meaning and a story that primary school pupils can relate to.

It tells the story of some water bugs in a pond and every so often one of the colony climbs the stalk of the water lily, disappears and never comes back. They make a pact that the next water bug that climbs out of the pond will return and tell all of the other water bugs what happens to them above the pond. When the next water bug leaves the pond, he discovers that his body changes and that he grows beautiful wings and becomes a dragonfly. He moves his wings and finds himself flying above the pond where his friends live. He then remembers the pact that was made. He attempts to return to the water in the pond but realises that now that he is a dragonfly he cannot return to the pond.

The story finishes in the following way:

“‘At least, I tried. But I can’t keep my promise. Even if I could go back, not one of the water bugs would know me in my new body. I guess I’ll just have to wait until they become dragonflies too. Then they’ll understand what has happened to me, and where I went.’ And the dragonfly winged off happily into its wonderful new world of sun and air…….”

The book has a lovely prayer at the end where pupils can pray for the deceased who has “left the pond that we live in” as well as praying for themselves.

The book can be bought relatively cheaply online on Amazon and Veritas.

A version of the story can be seen in this You Tube video: