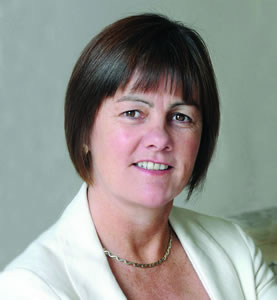 Sheila Nunan is General Secretary of the Irish National Teachers’ Organisation (INTO), the first female to date in its 141-year history to lead the INTO. She has been a member of the Central Executive Committee (CEC) of the INTO since 1995 and was INTO President in 2005/2006. In 2006 Sheila was elected Deputy General Secretary/General Treasurer and served in that role until her election as General Secretary in 2009, securing more than 60% of the ballots cast by the membership. Sheila is a former primary school teacher and principal. She taught in Tallaght and in Bray. She is a graduate of University College, Dublin and St. Patrick’s College, Drumcondra.

Seomra Ranga would like to thank Sheila for unreservedly accepting the invitation to partake in the new interview series on the website. Sheila accepted the invitation without hesitation or equivocation and did not request any subject area to be out of bounds for the interview. She has taken great time to give comprehensive responses to the questions put to her. I hope her responses will generate lots of talk, discussion and debate. DQ

Seomra Ranga: How did you become actively involved in the INTO?

Sheila Nunan: When I graduated from college I joined the then newly formed Tallaght Branch. It was a very vibrant branch with loads of young teachers starting their careers almost every year. There was an almost infectious energy, tremendous activity and also a good social scene. We had great debate on almost every issue there were loads of subcommittees preparing reports for branch meetings and there were elections for almost every position. There were very real issues to be tackled at the time on a range of issues from pay to conditions of employment to educational issues. The first major struggle was the Teachers United campaign to pursue an arbitration award that government refused to pay. But by then I was an officer of Tallaght Branch and I was hooked!

Seomra Ranga:  Have you taken, or do you intend to take, a cut in salary in line with salary reductions experienced by ordinary members of the Union?

Seomra Ranga: Considering that teachers’ salaries have been reduced in recent times, are there any plans to reduce the Union subscription fee accordingly?

Sheila Nunan: Yes. The INTO membership subscription is set, not by INTO Head Office but by members at Annual Congress. Last year the INTO Executive brought proposals to Annual Congress to reduce the subscription but this was rejected by the delegates. A similar motion will be tabled at this year’s conference later this month. We’ll know the answer at the end of the month.

Seomra Ranga: The rule about having to work one day every 26 weeks in order to avoid being classed as “new” on the DES system is surely a short-sighted one. It discourages permanent teachers from seeking career breaks, which leads to younger teachers having fewer opportunities to get classroom experience thereby creating difficulties for them as they attempt to become probated. This in turn will make younger teachers believe that they have no option but to emigrate. Is this not a rule that the INTO should be vehemently opposing?

Sheila Nunan: The INTO does oppose the measure and will continue to argue for it to be removed but it must be remembered that the 26 week rule does not only apply to teaching but to the whole of the public service. We will continue to work with other unions for it to be changed. Ireland can ill afford to lose highly qualified and enthusiastic teachers to emigration.

Seomra Ranga: The new rules being introduced with regard to Panels have led to great confusion amongst teachers, especially younger teachers. They feel that the goalposts keep on moving and that their chances of securing any meaningful long-term appointment have been seriously diminished. How has the INTO allowed this situation to occur?

Sheila Nunan: Redeployment has been a part of teachers’ conditions of employment for nearly eighty years and was hard won by the INTO at the time. The panel changes proposed this year are a direct result of the deal the previous government entered into with the EU and the IMF. Under that deal the government signed up to specific numbers in each sector of the public service. These were not negotiated with the INTO but were imposed on government by the IMF/EU. Because of the decision by government to cut 700 jobs from the service, announced last year in the budget, the number of teachers to be redeployed has increased from about 400 to about 1,100. So let’s not forget the root of this problem. It’s an employment and not a redeployment one. In general there will be about the same number of permanent vacancies as there are permanent teachers to be redeployed. There will be problems in certain areas which we will work to resolve as soon as possible.

In response to the concerns of members on this issue the INTO has organised meetings in most parts of the country. To date more than 2000 teachers have attended. We have also posted information on the website which has been viewed by thousands of teachers. The real challenge will be to maximise employment opportunities for every qualified teacher next year.

Seomra Ranga: Although a majority of teachers voted in favour of the Croke Park Agreement, many are now having serious doubts about it. Is this still a good agreement for primary teachers and in what way does it maintain or enhance our pay and conditions?

Sheila Nunan: The best way to decide if it is a good agreement or not is to look at the agenda of those who want to rip it up and why. They see it as the only thing between slashing public service numbers and public service pay. Most teachers like most citizens are fearful of the future and want a structure through which a credible future can be worked out for the country. The only avenue available to public servants is the CPA and it is important to say that primary teachers have stepped up to the plate and are implementing it. We will be holding government to account to keep its side of the CPA.

Seomra Ranga: Chris Keates, General Secretary of the NASUWT Teachers’ Union in the UK recently commented, “I have frequently said that if the GTCE (General Teaching Council for England) was abolished tomorrow, few would notice and even less would care.” Many teachers believe that the Irish Teaching Council is another layer of bureaucracy that could easily be done without and that the fee of €90 is excessive in the current economic climate. Does the INTO believe that the Teaching Council is an organisation that is necessary and gives value for money?

Sheila Nunan: The proof or otherwise of that statement will probably be tested now that the GTCE has been abolished and it will be “interesting” to see what changes the Coalition government in the UK imposes on teachers there.

The Teaching Council here is in its infancy and I am confident that it will make a major contribution to education. You must remember it is only a few short years ago that anyone could act as a teacher in a classroom. We vehemently opposed that and saw the establishment of the Teaching Council as one way of ensuring that only registered fully qualified teachers could teach in schools. There is also a huge need for change in the area of teacher education, probation and induction and professional development. The Teaching Council will partly be judged on how well it responds to those and other challenges.

Seomra Ranga: In view of the fact that many teachers perceive a negative bias towards the teaching profession and the Public Service in the media, should the INTO not project a more pro-active media campaign in order to ensure that teaching is promoted as a respected profession and focussing on the positive contribution the teaching profession makes to the country? Many teachers indeed feel that we are being scapegoated in the media and that the INTO has been relatively silent in our defence.

Sheila Nunan: I would have to say that there is not a perceptible media bias against primary teachers as a group. Most journalists and media outlets give teachers a fair hearing and I think recognise the excellent work carried out by members of the profession. There are many items in the news coverage recognising this. We do post a selection of this on the INTO website every month for members to see how the INTO does interact with the media on behalf of its members.

Seomra Ranga: Why should school-leavers consider a career in primary teaching given that the pay, conditions and pension benefits, especially of NQTs, appears to be constantly eroded, something which many believe the INTO have not fought hard enough to maintain?

Sheila Nunan: The facts are that the INTO has vehemently opposed pension changes, commissioned and published top class research to support our position and taken legal advice. We have lobbied politicians of all parties and will continue to do so in an effort to stop the changes being imposed. Ensuring fair pay for every teacher will be top of the agenda for the next few years.

Seomra Ranga: Is the INTO in favour of adding to the burden of principals by having them become involved in the probation of NQTs?

Sheila Nunan: No. Principal teachers are already stretched in terms of their leadership, managerial, administrative and pastoral roles in schools. Adding an additional requirement such as the probation of NQTs to the schedule of duties is completely unfair to both the principal and the NQT. That said most principals do play a very supportive part in the induction of NQTs, one that I am sure they will wish to continue. There are many shortcomings with current probation arrangements and the INTO will work with the Teaching Council to devise a new method of probation.

Seomra Ranga: How can the INTO encourage more members, especially younger members, to attend their termly Union meetings and become more active and engaged with the Union?

Sheila Nunan: Last year the INTO established a participation task force comprising many younger members which will report to this year’s Annual Congress. I won’t pre-empt the report that this committee will give to Congress by giving details of their work here. However I would like to thank them publicly for their work and to say the recommendations will be acted on which I hope will lead to increased engagement and active participation within the union.

Seomra Ranga: Ruairí Quinn is the newly installed Minister for Education and Skills. What will be the priorities of the INTO in their negotiations and discussions with the new minister and his officials?

I wish the new Minister well in his term of office, recognise the difficulties that he has inherited and hope we can negotiate and deliver fair and equitable solutions.