I have been using Twitter in the classroom ( @mrquinnsclass) for almost a year now. Although I had been using it personally ( @seomraranga) for a year previously, I wasn’t quite sure how I would use it in a meaningful sense in the classroom. However, a year down the line and Twitter has become part and parcel of our classroom routine just as spelling or tables might be. Our Twitter page is open on screen in a browser tab almost all the time and it is regularly visited and updated throughout the day. Barely a day goes by that we don’t Tweet about something that we are learning. It is integrated so much into the classroom that my 7 – 9 year olds will regularly remind me that “We should Tweet about that” or “Let’s ask that question on Twitter”.

Through Twitter, we made a connection with a school in Indiana, USA ( @superkiddos). I’ve previously written a Blog Post about our connection. It all started around last November when we were looking at our Twitter page one day and read a Tweet which said,  “Hi there! We are tweeting from our classroom too! Would you share with us what you’re learning today? Where are you?” And so started a Twitter conversation between our two classes which are around the same age. We have learned lots about each other’s lives and it has enhanced the pupil’s awareness that even though we may live on different continents, we have so much in common. Our US friends (I think Tweeps is the correct expression) even joined us in a Twitter project (#2011hope) with other Irish schools in January where we all Tweeted our hopes and dreams for the New Year.

I recently emailed Christi Overman, the classroom teacher of @superkiddos in the US and she came up with the idea of swapping treats with each other. What a clever idea this turned out to be and it caused great excitement and enthusiasm among the pupils, with a little learning thrown in along the way. It’s difficult to communicate the level of excitement that this simple project generated in the classroom. We had great discussions about what sweets we should and should not send to the US. The idea of the project was that we would exchange treats that could not be bought in the other country. We enlisted the help of a part time teacher in our school who was born in the US and she was able to tell the pupils what things would be good to send. She also whetted our appetites as to what our counterparts in the US might send us. So over a weekend the pupils set about finding treats to send across the Atlantic.

A small box was acquired from the office and this was gradually filled with treats that my pupils liked and thought were unique to this part of the world and could not be bought in the US. The box contained Emerald sweets, Snakes and Shamrocks, Randoms, Wine Gums, Flake, Cadbury’s Chocolate, Taytos, Hula Hoops, Chickatees, Snax and lots more. We took a photo of the pupils with the box before it was posted and we wrote a Blog Post on the school Blog about the project. The parcel was posted to the US just before St. Partick’s Day. We kept in contact with @superkiddos through Twitter during this process telling them what we were sending them and when we had posted the parcel. At the same time, we read on Superkiddos Blog that they were sending us their package. 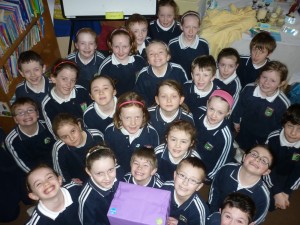 Rang II & Rang III with our package before sending it to Indiana, USA 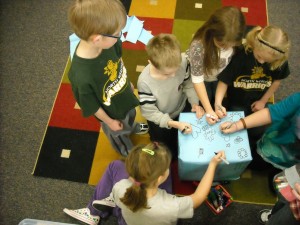 Superkiddos with their package before they sent it to Ireland

Almost every day after that, the first question that greeted me every morning was, “Did our box arrive from America yet?” There was a look of disappointment on their faces every time that I replied “No”. Then one morning last week, while I was in the middle of juggling mental maths and a Gaeilge exercise there was a knock on the classroom door. On opening the door, the pupils could plainly see the postman clutching the blue package. To say that sheer pandemonium erupted would be an understatement. The pupils were so overjoyed that it was almost pointless trying to continue with normal lessons for the rest of the day. The sense of anticipation grew as I let each pupil hold the parcel, feeling the weight of it and wondering what could possibly be inside this parcel that had travelled 3,000 miles.

We started off by letting @superkiddos know via Twitter that their parcel had arrived safely. Because of the time difference, it was a while before they replied and they were as excited to know our reactions as we were to start sampling all the treats. So the rest of the day was made up of tasting a US treat and tweeting about it. We had great discussions all day long about the merits and demerits of each treat. Teachers came and went and tried some samples in our classroom. The pupils had great fun, we took lots of photos and some were overheard on the way home remarking that it was their best day at school ever! Our Twitter conversation (with each Tweet limited to 140 characters) during the day went like this:

By sheer co-incidence, @superkiddos informed us through Twitter the next day that our parcel had arrived in the US, and so the whole process began again in reverse. My pupils were really excited again on discovering that @superkiddos were eating a treat that they had brought in to school. “That’s the one I brought in”, was heard more than once. We followed what superkiddos thought on their blog posts: “We Tasted Candy and Chips from Ireland” and “Candies from Ireland“. 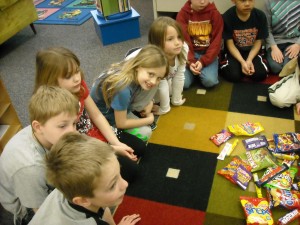 Superkiddos in Indiana, USA enjoying some treats from Sligo, Ireland 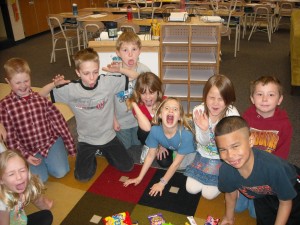 Superkiddos in Indiana, USA enjoying some treats from Sligo, Ireland

Shortly afterwards, we began to write a Blog Post on the treat exchange as a class exercise. The post was visible to the pupils on the IWB and I sat at my desk with the keyboard. I gave them the first line of the post and then told them that they had to tell me what they wanted to say. This was a great exercise in writing, editing and re-drafting. Individual pupils suggested a sentence to write; another would add an adjective, adverb or phrase to enhance the sentence; another would say we should go back and add in another sentence to clarify something. It was a great exercise in collaborative writing. Around this time 3rd Class were also learning how to write a letter, so the opportunity was seized to write Thank-You letters to Superkiddos’ teacher in the US. They have since been re-written and decorated and are due to be posted shortly. We’ve also kept all of the treat packages and have put together a display of the project on a corridor noticeboard. 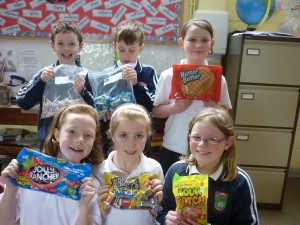 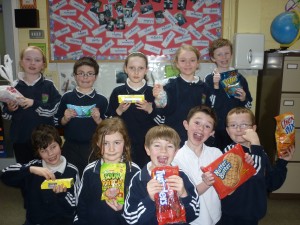 So what has the educational value of this exercise been?

And to think, this all started because of Twitter!