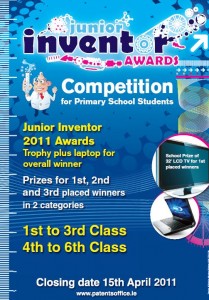 The Patents Office have recently launched the Junior Inventor Awards  2011. The Awards, which is now in its 4th year, seeks to encourage primary school children to demonstrate their creativity and inventiveness, and hopefully sow the seeds of interest in the sciences and engineering at an early age. Entries can include any idea for an invention that solves an everyday problem, for example the GPS system in cars or the dishwasher – ideas that makes life better or easier. Pupils are required to provide a drawing or illustration of their invention together with a short written description of the invention. The competition was originally launched by the Patents Office to mark its contribution to World Intellectual Property Day, which falls on the 26th April every year.

This year’s competition is divided into two class categories with one overall winner who will be presented with the Junior Inventor Award 2011. The categories are: –

Prizes will be awarded in each category and the first placed winners in each category will also receive a prize for their schools. Launching the competition, Eamonn Laird, Controller of Patents, Designs and Trademarks, said: ‘The Junior Inventor Awards has proved very popular with Primary School teachers and pupils and has gone from strength to strength since its inception. The level of creativity and inventiveness of the children never ceases to amaze me and that is certainly encouraging for the future of innovation in Ireland. I would urge all Primary School teachers to enter their pupils in this exciting and challenging competition.’ The closing date for entries is Friday 15th April 2011 at 5.00pm and the address to send entries is: Junior Inventor 2011, Patents Office, Government Buildings, Hebron Road, Kilkenny. The winners will be announced at a presentation ceremony in Kilkenny on Monday 16th May 2011. All Primary Schools should have received notification of the competition in the post and details are also available on the Patents Office website. Competition Rules are also available for download.