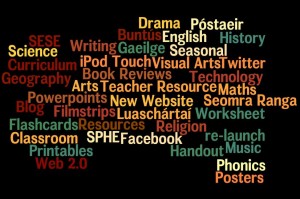 2010 was a busy year on Seomra Ranga, mostly taken up with the planning and putting together of the new website, which was eventually re-launched in November. To co-incide with the launch of the new website, Seomra Ranga also launched its new Facebook page which has blossomed in a very short space of time. The Seomra Ranga Twitter page was also re-launched displaying the new logo and colour scheme. As usual, the year also meant that lots of new resources were added to the site in lots of different curricular areas. This year also saw the introduction of the iPod Touch into my classroom, which has been a huge success. I’ve written a number of articles during the year on the Blog charting the progress we have made on the integration of this new technology into the classroom. I’ve used the Wordle website to produce a visual representation of 2010 on Seomra Ranga and you can view it HERE.

Best wishes to all visitors to the site for 2011 and hopefully you’ll continue to visit the site in such large numbers.