Google Docs and the iPod Touch

I’m a relative novice to Google Docs and never really personally saw the need for me to find out what they could do and how to use them. I had been aware from many articles on the internet written by people in the field of education that they were widely used. However, it was only when I received my class set of iPod Touches in May 2010 that I began to think about how Google Docs could be incorporated into the use of the iPod Touch in the classroom.

I’ve received my class set of iPods on loan through a pilot project organised by Sligo Education Centre and Apple Ireland. Four classes in the country are piloting the use of this handheld technology in the classroom and they are located in Kilkenny and Wexford and are supported by their local Education Centre. 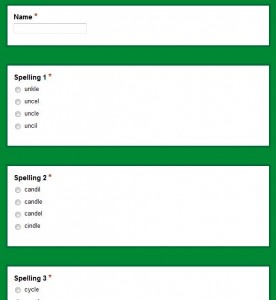 One area that I thought that Google Docs could be useful was in the area of spelling and tables so I started to learn how Google Docs could be used with the iPod Touch in the classroom. To use Google Docs, you have to set up a Google account if you don’t already have one. When registered, you then just go into Google Docs and select “Create New >> Form”. You then just set up a form any way you wish. There are different ways of seeking responses from pupils. You can have a text box answer, a paragraph answer box, a scale 1-5 answer box etc. For our Spelling Test, I set up a form where there were four possible answers for each spelling that we had been learning during the week. There was a radio button beside each spelling and the pupils had to select the radio button beside the correct answer for each spelling. There was also a text box for pupils to fill in their names. There was also a paragraph answer box for the pupils to type in their dictation sentences. All questions were marked with an * to show that they were mandatory fields and had to be completed. If a pupil forgets to fill in a field they will not be able to submit a form.  Google Docs also creates a spreadsheet associated with the form that has been created. The spreadsheet gathers the information from the answers selected by the pupils.

When creating the form in Google Docs, an address for the location of the form is also generated.  Because Google Docs is created online, pupils need to have online access. We have an Apple Airport router in the classroom which connects to the school broadband. The iPods have been set up to connect to the internet through this router.

So I placed the URL of the Google Form on the School Blog, to which the pupils have already set up a shortcut on one

of the homescreens of the iPod. They open up the blog, click on the link to the Google Form, select what they think are the correct answers and fill in their dictations. When they have completed all sections of the form, they click “Submit” at the bottom. In the meantime, I have already opened up the associated spreadsheet on the whiteboard and the pupils are always amazed when their answers appear instantaneously on the screen. Each pupil’s answers appear on a single line of the spreadsheet. The teacher can also look down a column to see the class response to each spelling – it can be easily spotted if the class as a whole has had a problem learning a particular spelling.

I have done similar exercises with maths tables and litriú Ghaeilge. I have done this exercise with 1st Class, 2nd Class and 3rd Class and the response has been widely positive. Once the pupils got used to the idea, they found it quite easy to complete. As with all classroom work, some were finished quicker than others. This has been my first tentative steps into using Google Docs with iPod Touches in the classroom. I’m sure that there are boundless possibilities as to how something similar can be used for assessment tools and pupil responses in other areas of the curriculum.