Using iPods in the Classroom 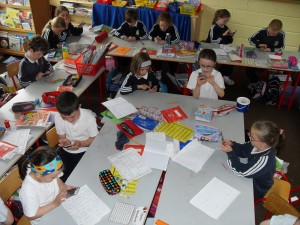 Those of you who follow this blog will know that my class and I are involved in a pilot project looking at how iPod Touches can be of an educational benefit in Irish primary school classrooms. This project has been organised by Sligo Education Centre in association with Apple Ireland. There are three other classes involved in the pilot project in Kilkenny and Wexford. In previous posts I have mentioned how the project is organised in the classroom and examples of the sort of apps that we have used. In this article, I just wanted to mention some of the other uses that we have made of the iPods.

One really great use that we have found for the iPods is to use them to do spellings / tables / litriú tests on. It’s amazing how enthusiastic pupils can be about spellings all of a sudden when you introduce technology as a method of completing the task. We sometimes do this in one of two ways. Firstly, if it’s a short test like just doing four spellings and four tables on a daily basis, we sometimes use the “Notes” app which comes pre-installed with every iPod Touch. This is a very simple notepad with a pop-up keyboard. It was amazing how quickly the pupils mastered the fact that there were three separate keyboards – one for letters, one for numbers and one for punctuation. Even seven year old pupils in Rang I mastered this without difficulty. When Rang III started to learn litriú this year, I thought that we wouldn’t be able to do these in this “Notes” app because if the síniú fadas. However I should have known that at least one of the pupils would already have discovered how to do this – one eight year old demonstrated to the other pupils (and the teacher!) that if you held your finger down on the vowel a list of options popped up, one of which was the vowel with the síniú fada. So now we have also been able to do litriú using this method. 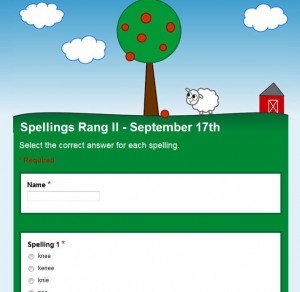 Another method we use to do spellings using the iPod Touches is by using Google Docs. I’m quite a novice at Google Docs but this seemed to me to be a great way to become acquainted with how to use them. If you have a Google account you can access their documents when you log into your account. For these spellings tests, I have simply set up a form in Google Docs where there are multiple choice answers for the spellings. I place a link to the form on the school blog. We have placed a bookmark to the school blog on one of the homescreens on the iPod. The pupil simply visits the blog which opens in Safari and they click on the link for the spelling form. The pupil is then presented with four options for each spelling that they have learned and they click the radio button next to the correct spelling in each case. I also include paragraph boxes at the end of the test to allow the pupils to type in their dictation sentences that I call out. When they have completed the test, they click the “submit” button. At this stage I also have the spreadsheet which is linked to this form open on the whiteboard screen. As soon as the pupil has submitted their spelling work, their answers should immediately appear line by line on the spreadsheet. They love the immediacy of this! It’s not too difficult to imagine the skills that pupils are learning by engaging in such an activity. There is great hand-eye co-ordination as they use the small keyboard; there are listening skills involved as they listen to the teacher for dictation; there is memory and recall being used as they complete dictation; there is decision making as they select the correct spelling. Educationally they are not learning anything new – however, they are just using modern technology to get to the same end point. The difference is that the iPods are hugely motivational and that can only be of benefit to the pupil in the long term.

Using the iPod Touches for research on the internet is a great advantage of handheld technology. Again, it’s the immediacy of the action that is so beneficial. Just today, Rang III were doing an exercise from their English book where they had to sort and classify and list animals according to whether they had long or short tails. As they began to ask me questions about the length of tail of certain animals, I knew I couldn’t answer them truthfully. However, the solution was in their hands. They just went onto Google Images and searched for images of each of the given animals before making their decision of which list to put the animal in. They have also done other work where they have to look on the internet for information about certain things. The fact that the world of the internet is on their fingertips is a huge advantage.

I’ve been looking at some ways of allowing the pupils to interact with the whiteboard by using their iPod Touches. I looed around for online noticeboard type sites. I liked the Wallwisher website and thought about ways that we could use this site. However, one of the disadvantages of the iPods is that they do not support any Flash-based or similar sites. Through Twitter (@tonyvincent) I became aware of the Wiffiti website which does support iPods. We tried this last Friday, but I wasn’t entirely happy with the results and may just keep on looking for another similar website to allow the pupils to give feedback on a particular topic using the iPods. 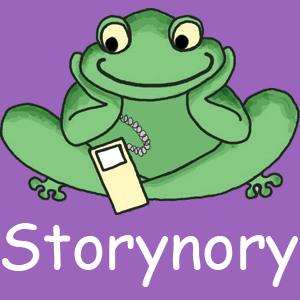 Another great way we are using the iPods is to listen to Podcasted stories. At the moment we are using stories from Storynory. On the iTunes account that we have set up, I have simply subscribed to the Storynory podcasts. So when I go in to iTunes I can decide which stories I want to download onto the Mac. I then sync all the iPods to this iTunes account and the podcasts are downloaded onto each iPod. The stories tend to be traditional tales which are very suitable for the age group that I am teaching. The classroom is never as silent as when the pupils are sitting quietly, each with an iPod and a set of earplugs in each pair of ears. They have also completed Podcast Reviews as a follow up to their listening. These are exactly the same as a book review and are a great way of responding to the podcast and ensures that the pupils have listened well. The pupils really enjoy this activity.

I hope this article has given readers a brief flavour of the influence the iPods have had in my classroom since their arrival. They have certainly changed the dynamic of the classroom. The pupils are extremely motivated and eager to do work using this modern technology. We are stiil discovering new ways of using the iPods to enhance the teaching and learning experience, but so far we are all really enjoying using them.