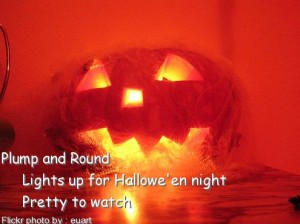 Writing some poetry was a theme in our English work during the past couple of weeks with my class of seven, eight and nine year olds. We had written some cinquains and octopoems to a greater or lesser degree of success. Co-incidentally, at the same time I read a blog post entitled “Writing Poetry with an iPod Touch” by Mary Farmer (@ebd35) where she explained how she had discovered a very easy app for creating Lunes. Lunes are a type of Haiku poetry with three lines – three words in the first line, five in the second and three in the third. The app was created by John Johnston (@johnjohnston) – he has written a blog post, called “iPod Touch Poems“, where he explains in more detail how to create the Lunes. In a nutshell, you do a Creative Commons search for a photograph on Flickr, the photo sharing website. You select the photograph you wish to have as your background, you overlay the text onto the photograph and create the Lune which is saved as an image.

We did have some teething problems when initially creating the Lunes, but once that was sorted out the pupils were easily able to create a couple of poems each. The pupils had to first visit the site of the Lunes App and save the page to the homescreen of the iPod Touch. They then opened up the app from the homescreen, even though it then opens up in the Safari browser. They then searched for their photograph by entering a keyword. Here’s the tricky bit – once the first page of thumbnails appears, you must click on >> (the two blue arrows) to go to page 2 of the image search. For some reason, if this step is skipped you will not be able to save the finished Lune. When the pupil selects a photograph, a three-line template appears for writing the poem on top of the photograph. They could then choose to have the text on the top, middle or bottom of the photograph, depending on the layout of the photograph. They then simply click “Create Poem” and the Lunes is created. At this stage, the copyright holder of the image appears on the bottom of the photograph. To save the image, you hold a finger on the image and choose to save it in the photo gallery on the iPod. The pupils then came up to me and we used the Bump App to transfer their Lune from their iPod onto mine. They really enjoyed doing this. This app saves you the trouble of downloading each pupil’s image individually onto the class PC. Once all images were “Bumped” onto the teacher iPod, you just connect that one to the class PC and download all images at once.

Once we had completed creating the Lunes on the iPods, we printed them out and displayed them in the school. We also imported the pictures into Photostory (the free and easy to use movie-creating software) and created a movie of Lunes poetry. We recorded the pupils reading their own lunes which can be done from within the Photostory software. The movie was then created. You can read what the pupils wrote about this exercise and see the movie in our School Blog.